Every year, thousands of people flee violence, insecurity, and persecution

They attempt a treacherous journey via north Africa and Turkey, in an attempt to cross the Mediterranean to reach Europe.

And every year, countless lives are lost on these journeys.

In 2016 alone, 5,096 people are thought to have died or gone missing during the crossing.

“A mass grave is being created in the Mediterranean Sea. Faced with thousands of desperate people fleeing wars and crises, Europe has closed its borders, forcing people in search of protection to risk their lives and die at sea. There is no more time to think, these lives must be saved now.”

MSF search and rescue: the facts

Podcast: How we rescued 560 people on the Mediterranean >

If deemed necessary to save lives, MSF boats have approached the limit of international waters which are – by law – 12 nautical miles from the Libyan coast. Entering Libyan territorial waters is highly exceptional.

There were three occasions in 2016 when MSF – with the explicit authorisation of the relevant Libyan authorities – assisted in rescues 11.5 nautical miles from the coast.

We look out for boats in distress using binoculars and respond to directions from the MRCC in Rome in the event of an SOS call. Italian law states that not answering an SOS call from a boat in distress is an omission of rescue, subject to a penalty of one to five years of detention.

Non-governmental organisations account for a minority of search and rescue operations in the Central Mediterranean. EU assets, the Italian Coast Guard, commercial vessels and other actors are also involved in these operations, which are necessary to save lives.

Refugees, migrants and asylum seekers are not interchangeable terms. The following is a brief explanation of the very different legal definitions:

As a humanitarian agency involved in search and rescue, MSF does not have a mandate or means to assess the immigration status of the people we assist.

We provide medical care without judgment and strongly believe that no human being should drown when the means exist to prevent it.

Where are the people rescued at sea taken?

Our primary aim was to prevent loss of life, not to provide transport.

When a situation arose in which we had to intervene, we did so under the direction of the Maritime Rescue Coordination Centre in Rome.

They also decided where those we rescued should disembark, as dictated by the laws of the sea.

As a rule, those we rescued were taken either to reception centers in southern Italy (Sicily) or transferred from search and rescue boats to Italian coast guard vessels. 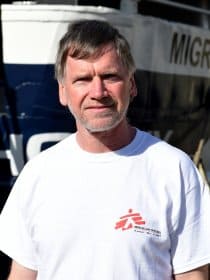 A compromise to MSF’s neutrality?

We felt compelled first and foremost to assist people who were dying in the Mediterranean. We had the means and, for us, ignoring the problem was not an option.

Of course, we are aware that by doing this we are entering a very contentious political debate in Europe. But we believe that inaction cannot be justified on ideological grounds and that, in fact, as a medical organisation that takes its cues from medical ethics, we must take action. Find out more about our principles.

MSF in the Mediterranean: 2016

In 2016, over three hundred thousand people fleeing wars, persecution, poverty and insecurity attempted to cross the Mediterranean in search of safety and refuge, according to UNHCR, the UN’s refugee agency.

It was the deadliest on record: 4,581 men, women and children died attempting to cross from North Africa to Europe.

Of the 181,436 people who arrived safely in Italy after being rescued at sea, the vast majority had embarked in Libya. None would have made it to safety without rescue.

Hear more stories from the Mediterranean on

All three boats actively searched for boats in distress in international waters north of Libya.

Between late April, when the first boat, Dignity I, was launched, and the end of the year, teams rescued 21,603 refugees, asylum seekers and migrants and assisted 8,969 more in over 200 operations.

Medical teams onboard treated violence-related injuries linked to detention, torture and other ill-treatment, including sexual violence, in Libya.

Pregnant women were cared for by midwives onboard and several babies were born safely at sea. Lifesaving emergency care was also provided in emergency rooms on the ships or through medical evacuations, when needed.

People continued to try to cross the Mediterranean even as winter approached. From October onwards, MSF in collaboration with SOS MEDITERRANEE, ran the only NGO boat continuously carrying out search and rescue in this stretch of sea.

Despite harsh weather conditions, in the first three months of 2016, 151,452 people made the eastern crossing from Turkey to the Greek islands, the largest number landing on Lesbos.

During the same period, 366 men, women and children lost their lives in the Aegean Sea.

We provided assistance to boats in distress off the coast of Lesbos until June, when the drop in arrivals meant that the team’s presence was no longer required.

Between December 2015 and June 2016, the MSF-Greenpeace rescue operation assisted more than 18,117 people in 361 interventions.

Find out more in our International Activity Report