MSF focuses on emergency, paediatric, and maternal healthcare in Afghanistan, which has one of the highest maternal mortality rates in the world.

We work in one hospital in Helmand province in collaboration with the Ministry of Public Health. We also run a maternity hospital in rural Khost province, a drug-resistant tuberculosis programme in Kandahar, and a trauma centre in Kunduz. We treat malnourished children, who have been displaced, in Herat province, where we also run a COVID-19 treatment centre.

Major attacks on MSF hospitals have occurred in recent years; in October 2015, US airstrikes destroyed our trauma centre in Kunduz, killing 42 people. An armed group attacked our maternity wing at Dasht-e-Barchi hospital in Kabul in May 2020, with 16 mothers and an MSF midwife among those killed. In the wake of the attack, we made the difficult decision to withdraw from the hospital in Kabul, leaving women in the area without critically-needed emergency obstetric care.

In August 2021, the Islamic Emirate of Afghanistan (also known as the Taliban) entered the city of Kabul as the government collapsed. MSF teams have stayed in place and continue to provide care.

People struggle to access medical care in Afghanistan, where – even as the government has collapsed and uncertainty has set in – we remain to address people’s needs. 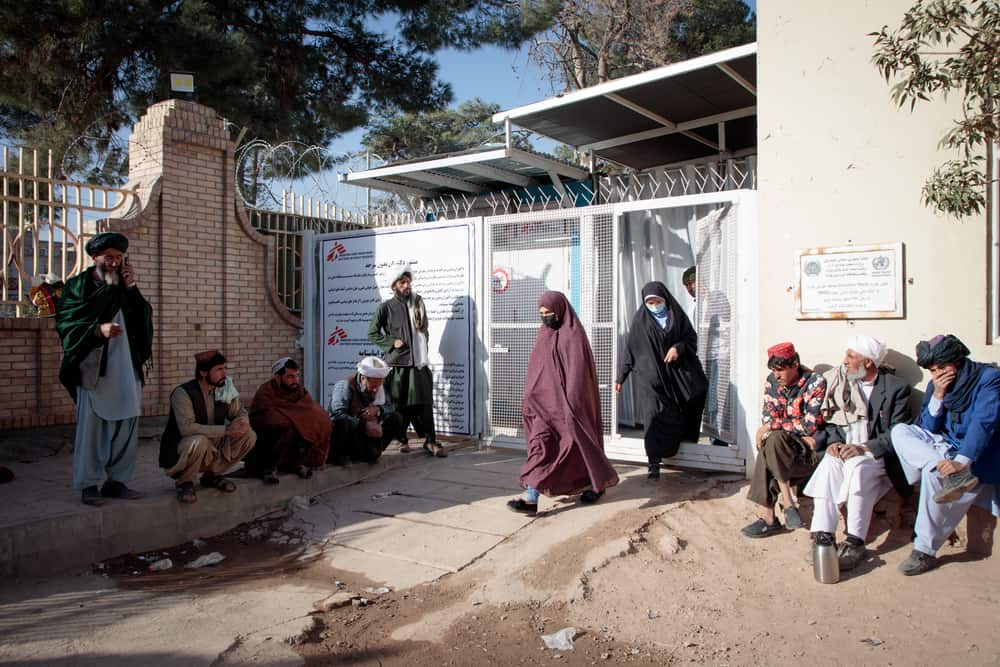 What are we doing in Afghanistan?

By providing free, high quality maternal and neonatal healthcare in two hospitals in Helmand and Khost provinces, we aim to help reduce death and sickness in mothers and their newborns. Training medical staff is an integral and important part of our projects.

We support the diagnosis and treatment of drug-resistant tuberculosis. In Kandahar province, in the south of the country, we run a laboratory, as well as facilities for hosting patients during their treatment.

We opened a new 30-bed trauma centre in Kunduz in August 2021. The centre treats people with trauma injuries, for example, as a result of road traffic accidents, and people injured in the fighting who have complications.

In both Herat and Helmand provinces, we treat malnourished children in inpatient therapeutic feeding centres; those coming to the centre at the regional hospital in Herat have often travelled some distance to get there.

On 12 May 2020 the MSF maternity ward in Dasht-e-Barchi hospital, Kabul, was attacked. Gunmen killed 24 people, including 16 mothers, two children and an MSF midwife.

Highlights of our activities in 2020

MSF started running the maternity and neonatology departments of the 100-bed Dasht-e-Barchi hospital in 2014 and provided ante- and postnatal care and family planning. We also supported maternity care in another hospital in the area with staff, training and essential drugs.

The attack rocked MSF to the core, and when no information emerged about the perpetrators or the motive behind it, we made the very difficult decision to withdraw from Dasht-e-Barchi in mid-June. To support the Ministry of Public Health after our departure, we donated medications and medical equipment.

The end of MSF’s activities in Dasht-e-Barchi will likely have devastating consequences for the more than one million people, predominantly Hazara, who live in the area.

Helmand province has been the scene of violent clashes between government and opposition forces for more than a decade. In October, when intense fighting broke out around Lashkar Gah, the main trauma hospital in the city was overwhelmed with casualties within 24 hours, and our team at Boost hospital started to receive an influx of people wounded in the crossfire.

MSF supports several departments in Boost hospital, including the emergency room, which saw around 300 patients a day in 2020, most with trauma injuries, respiratory tract infections or acute watery diarrhoea. Our teams found that, due to a combination of insecurity and COVID-19, many patients delayed seeking care and arrived in a critical condition. From April, we also managed a COVID-19 isolation ward for vulnerable patients such as pregnant women, children, people with tuberculosis (TB) and those who had undergone surgery. All other patients were referred to Malika Suria COVID-19 hospital.

In February, MSF started supporting the outpatient department of Fatima Bayat hospital with training and drug supplies, in order to reduce the number of people with non-urgent medical problems coming to Boost’s emergency room.

COVID-19 in Kabul and Herat

The first case of COVID-19 in Afghanistan was confirmed in Herat at the end of February. Kabul and Herat became the epicentres of the outbreak but the true number of people infected with the virus across the country is unknown due to lack of testing.

In Kabul, MSF supported infection prevention and control in the Afghanistan-Japan referral hospital and trained local health staff. These activities ceased after the attack on Dasht-e-Barchi. In early April, we set up a COVID-19 triage system in Herat regional hospital. Then in June, we opened the 32-bed MSF Gazer Ga COVID-19 treatment centre, focusing on oxygen therapy for severely affected patients referred from the regional hospital. The centre closed in September when the number of cases reduced but reopened on 2 December for the second wave.

In all MSF projects in Afghanistan, infection prevention and control measures were reinforced to reduce COVID-19 transmission.

Other activities in Herat

In 2018, MSF opened a clinic for displaced people in the Kadhestan and Shadayee settlements on the outskirts of the city. Our team offers medical consultations, treatment for malnutrition, vaccinations, ante- and postnatal care and family planning, conducting an average of 266 consultations a day. Outreach activities started in December 2020. We also run an inpatient therapeutic feeding centre in the paediatric hospital.

Since 2012, MSF has been running a dedicated 24-hour maternity hospital in Khost, eastern Afghanistan. In 2020, to reduce possible transmission of COVID-19, the admission criteria for the maternity hospital were tightened and women in labour were no longer allowed to be accompanied by a caregiver. This led to a significant drop in the number of women giving birth in the facility and put more pressure on Khost provincial hospital; our deliveries dropped by 38 per cent, while those in the provincial hospital increased beyond their capacity.

To address this negative impact on the population and other health providers, towards the end of the year we loosened the admission criteria and female caregivers were once again allowed to accompany patients. As a result, the number of births in the facility started to increase, rising to 1,000 in December. We also resumed family planning consultations at the hospital, and health promotion activities in the five community health centres we support in the districts.

DR-TB is a major concern in Afghanistan, exacerbated by a lack of knowledge about the disease and poor availability of treatment. MSF has been supporting the national tuberculosis programme in the diagnosis and treatment of DR-TB in Kandahar province since 2016. In December 2019, we introduced a nine-month oral regimen allowing DR-TB patients to change from injectable drugs to pills and reduce their number of consultations at the hospital. The results are promising so far, with no one defaulting from the short-course treatment. Since insecurity makes it difficult for patients to visit the centre for follow-up, they are provided with a buffer stock of medicine in case they cannot travel.

We also continued to support the health ministry in Mirwais regional hospital and at the provincial TB centre, by providing medical care for drug-sensitive TB patients. In 2020, we supported the Ministry of Public Health to detect TB and manage care for patients in Sarpoza prison.

Activities in Kunduz were hard hit by COVID-19 and they were all suspended in April. However, construction of the new trauma centre resumed in September, with increased infection prevention and control measures to guard against the virus. Stabilisation activities in Chardara for patients with trauma injuries are due to resume in early 2021. The wound care clinic will not reopen.

Afghanistan: “It is difficult to know that we are something less”

MSF condemns the ban on women working for NGOs and their erasure...

Afghanistan: The MSF hospital in Kandahar provides hope for people with TB