Her name was Tahera*. She had been brought to the MSF-supported Herat Regional Hospital the day before by her parents; with a red, blotchy rash spreading down her little body. After being assessed by our medical team she was admitted to our measles intensive care unit where we already had close to 50 patients although, in theory, we only have space for 20.

In addition to the measles, we could also see that Tahera was malnourished, and she was struggling to breathe. She was also getting worse.

Worried about her condition, we rushed her to the ‘red zone’, where we bring patients who need immediate lifesaving care. Holding her you could feel her exhaustion.

We had all seen this before, too often, several times a day. Where a child’s body runs out of energy, and runs out of fight. Sometimes no matter what we do – we lose patients. And with the measles, we have been losing a lot. On average two a day.

As we placed her on the bed, we could see her body straining to breathe, using every muscle to force the air in and out of her lungs. Despite her efforts, her eyes were closing, and her body began to give up.

We were doing everything we could. We were giving her oxygen to help her breathe. Despite this, we could see her oxygen levels dropping dangerously. A healthy person’s oxygen saturation is above 95%. Hers was far below. And no matter what we did – it kept dropping. 30%, 28%, 22%.

Her skin began to turn blue. Feeling helpless, the whole team was frantically thinking about what else we could do. All the standard care options were failing us. On the verge of losing this tiny girl, an idea.

When a newborn isn’t breathing well you can position them on their fronts, in what’s called the ‘prone’ position. This can improve lung function. It’s something that in Afghanistan has also been used for adults with COVID-19, but never for infants. But it was our last option. So, with a whole team of nurses and doctors watching her – we decided to try it. We rolled up a little blanket the mum had and gently flipped the baby over. Then we lay her on top, on her front, with her face carefully turned to one side.

Babies often don’t like this position, so we knew we needed to minimise her stress levels by keeping her as calm as possible. Her mum had been watching everything, extremely worried, and now we asked her to come and talk to the baby, to stroke her hair, to give her a finger to hold.

Over the next five minutes, we watched the numbers on Tahera’s oxygen monitor anxiously.

Gradually, they started to climb.

You could see the relief on the face of her mother; and the team. We had beaten the odds this time. We got to turn around and tell a mother that it was going to be okay. 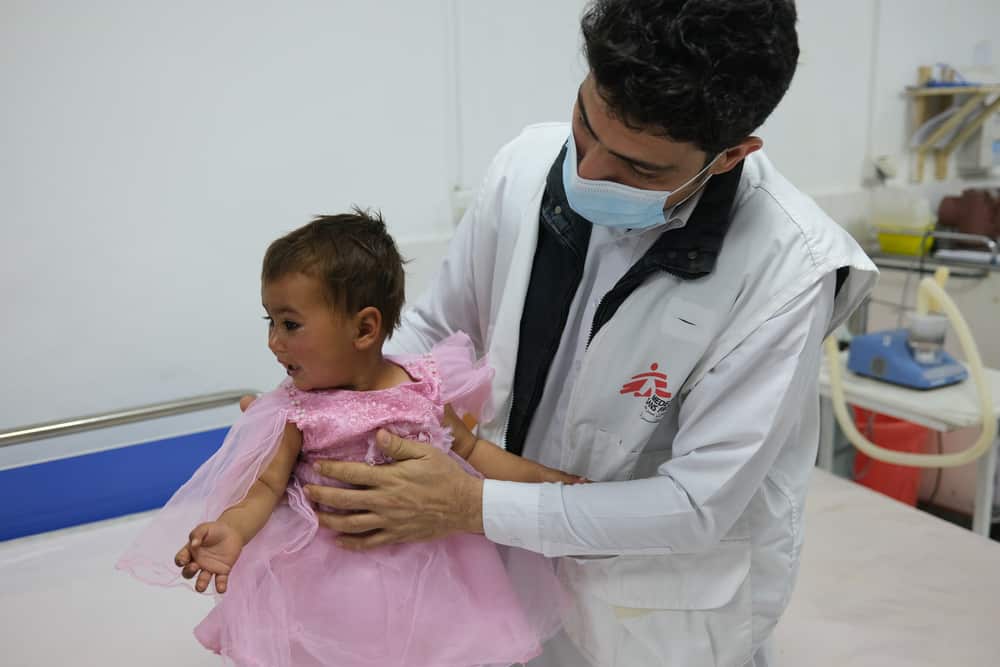 Samira, pictured in Boost hospital’s emergency room, has been unwell since catching measles two months ago. Measles weakens children’s immune systems which can lead to other health problems even after the measles goes away. 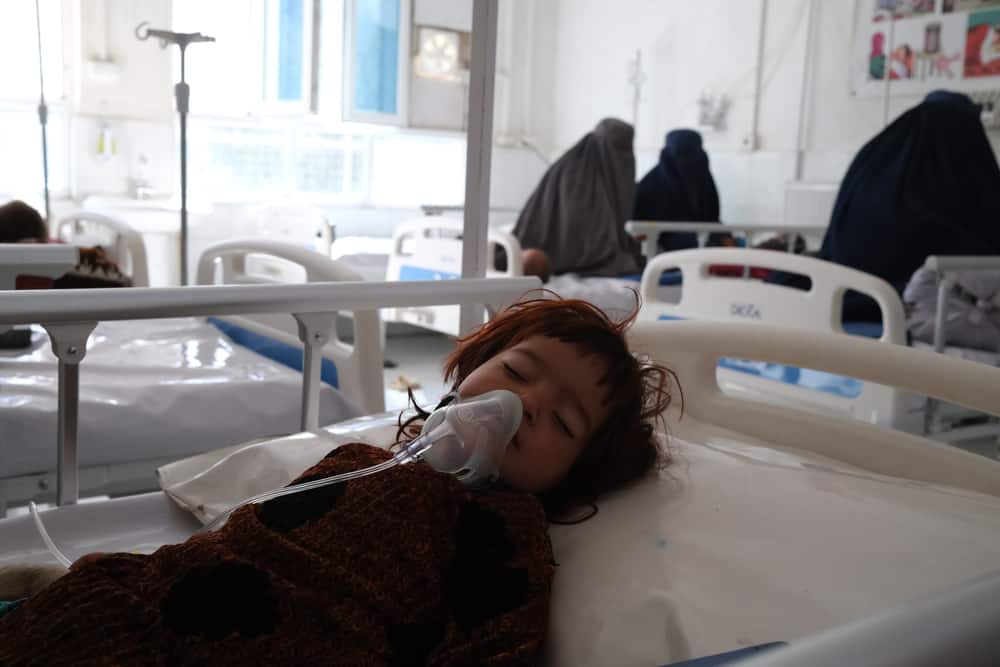 A patient in the measles isolation ward at Boost hospital. Over 440 measles patients were admitted to the ward in January and February 2022. 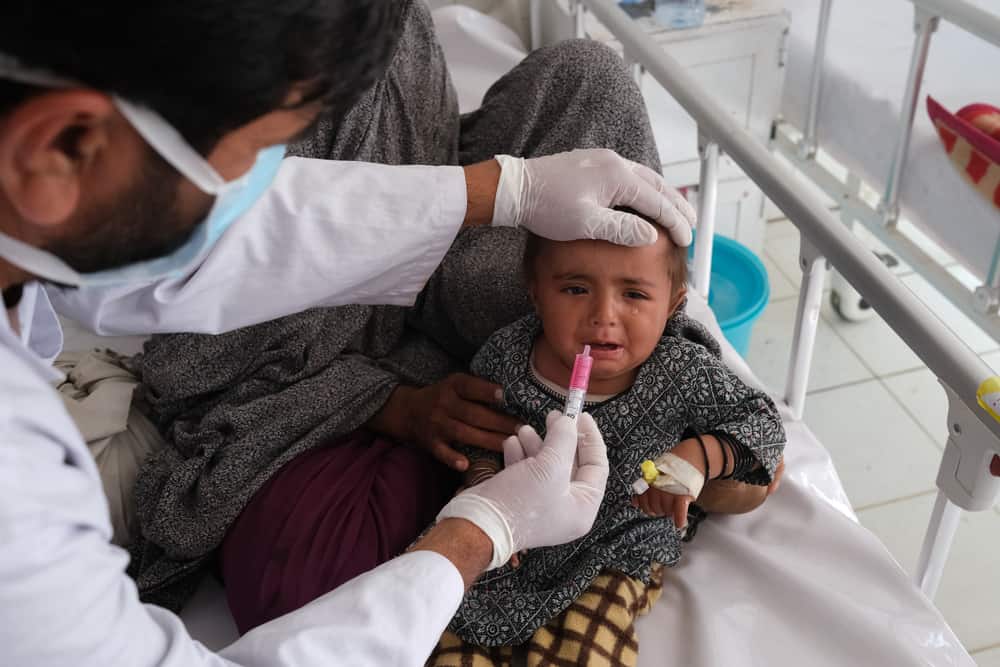 A medic gives glucose to a patient in the measles isolation ward at Boost hospital. Over 440 measles patients were admitted to the ward in January and February 2022. 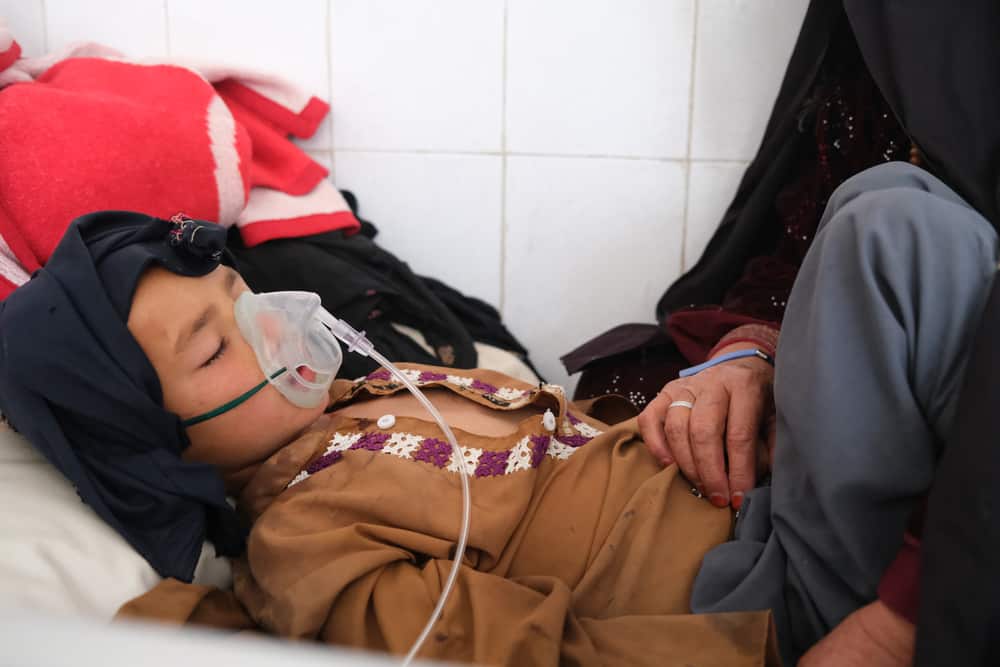 A patient in the measles isolation ward at Boost hospital. Over 440 measles patients were admitted to the ward in January and February 2022.

Patients in the measles isolation ward at Boost hospital. Over 440 measles patients were admitted to the ward in January and February 2022

Measles is one of the most contagious diseases in the world. It is also one of the most easily preventable – with a safe and effective vaccine. But due to the crisis in Afghanistan, many children have not been vaccinated. Years of war and conflict have strained the Afghanistan health services. For many years vaccination teams struggled to cover children for many routine vaccinations – including measles.

This year the whole of Afghanistan, not just our project in Herat, has seen a huge increase in measles cases. In Herat, we currently see over 200 cases a week, mostly children under five years old – 60% of whom need to be admitted and need extra care.

The fix is very simple – a country-wide vaccination campaign could break the chain of transmission. But – because of the events of August 2021, sanctions have meant support to Afghanistan was disrupted, including the importation of measles vaccines. As a result, in the middle of an outbreak, there are not enough vaccines for everyone.

Until every child is vaccinated, we will continue to see children like Tahera arriving at our hospital.

In recent months we have been busy. In response to the measles outbreak, we have just opened an additional ward of 60 beds just for measles patients. Three days after opening we had already admitted 112 patients, with children often sharing beds due to a lack of space.

Following advocacy efforts from our team in Herat and in Kabul, finally, enough measles vaccines were provided to vaccinate Herat City, where most of our patients come from.

Though this will save lives in Herat City, we also know that other communities will not be so lucky. And we often think about the places where MSF is not present, and where the situation is almost certainly worse.

For now, we enjoy the successes that we have.