Rohingya refugee crisis: Two years on, no solutions in sight for the Rohingya

Sitting in a teashop in Kutupalong mega-camp, Bibi Jan tugs on her sleeve. She’s covering up scars inflicted during the largest-ever episode of violence against the Rohingya, in August 2017. She tells us of the events that forced her to flee to Bangladesh: her two brothers were killed, she herself was stabbed, and her village was razed to the ground.

A marginalised ethnic minority from Rakhine state, the Rohingya have in recent decades been subject to mounting targeted state exclusion and persecution.

Two years ago, news of Myanmar’s campaign of violence against the Rohingya dominated the headlines. Since then, very little progress has been made to address the lack of legal status for the Rohingya in the region, or to address the underlying causes of the Rohingya’s exclusion in Myanmar.

To date no meaningful solutions have been offered to the Rohingya, who have been pushed to the margins of society in virtually all the countries they have fled to.

“When we left Myanmar, we didn’t take anything. So we need everything: clothes, food, medicine, light, ventilation, water, everything.” 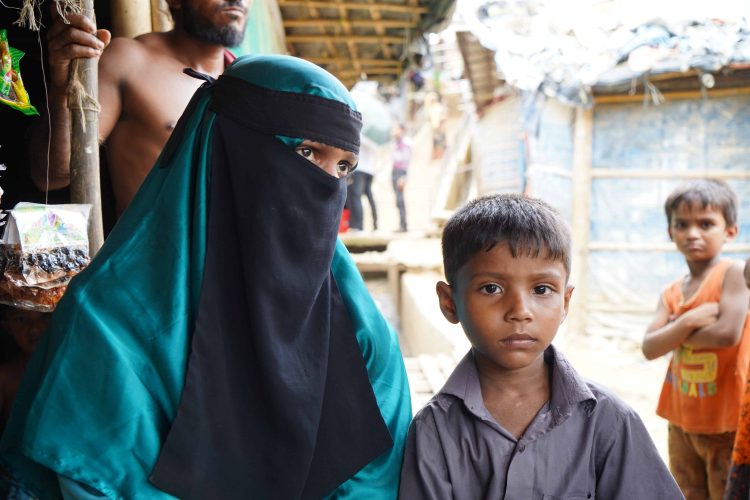 Bangladesh: “It’s difficult to plan a future for our children”

In Bangladesh, over 912,000 Rohingya still live in the same basic bamboo structures as when they first arrived, face travel and work restrictions, and remain wholly reliant on humanitarian aid.

Many of the illnesses Doctors Without Borders/Médecins Sans Frontières (MSF) treats at its clinics in Cox’s Bazar are a result of the poor living conditions that the Rohingya endure, with poor access to clean latrines or water.

MSF continues to treat tens of thousands of patients a month, performing over 1.3 million consultations between August 2017 and June 2019.

With children unable to attend formal schooling, future generations are deprived of an opportunity to improve their situation. “I want to send my children to school but I don’t have enough money and we can’t leave the camp, so it’s difficult to plan a future for our children,” Bibi Jan says. “If we were allowed to work, we wouldn’t need rations, we could survive on our own.”

"Health requires a lot more than medications or surgery. It requires a livelihood, it requires educations for kids, a bigger space to work, a stable family unit. It requires a normal setting and that's not what exists in the camp"
- RANDALL WAGNER
KUTUPALONG HOSPITAL DIRECTOR

Myanmar: “We hold our frustration inside”

The situation facing the Rohingya still in Myanmar is similarly bleak. In 1982, a citizenship law rendered them effectively stateless, and in recent years they have been stripped of even more of their rights, ranging from civic inclusion, the right to education, marriage and family planning, to freedom of movement and access to healthcare.

In 2012, violence between the Rohingya and Rakhine communities left entire villages razed. Since then, some 128,000 Rohingya and Kaman Muslims in central Rakhine have lived in overcrowded and squalid displacement camps.

Denied freedom of movement and jobs, as well as access to basic services, they likewise rely entirely on humanitarian assistance.

“There aren’t any real opportunities for employment here; there are hardly any fish to catch either. Because there’s so little trade, we can’t buy the things we want,” says Suleiman, a Rohingya living in Nget Chaung – an area where some 9,000 people live.

“People here are sad, they are frustrated that they can’t go anywhere or do anything more. We hold our frustration inside because we cannot speak out – there are no opportunities for that. We cannot even travel to the next township, so people keep everything inside, bottled up.”

An estimated 550,000 to 600,000 Rohingya remain across Rakhine State. Their already difficult lives have become harder as they and other communities suffer the consequences of a worsening conflict between the Myanmar military and the Arakan Army, an ethnic Rakhine armed group.

The Rohingya likewise remain in limbo in Malaysia, where they have been fleeing to over the past 30 years. There, lack of legal status pushes them and other refugee and asylum seekers into an increasingly precarious situation.

Unable to work legally, they often disappear into Malaysia’s urban black market economy, where they are vulnerable to exploitation, debt bondage or work accidents. Walking down the street or even seeking medical care can result in refugees being sent to detention centres or extorted.

Iman Hussein, 22, fled Rakhine in 2015, spending time in Thailand before arriving in Penang, Malaysia. Like many refugees, he has eked out a living by working in Penang’s booming construction industry. His employer hasn’t paid him his salary for the past 10 weeks, but says he has no choice but to keep working as he lives on site and would be destitute if he left.

“Over the past two years, very little real effort has been made to address the underlying causes of the discrimination the Rohingya face and enable them to return home safely,” says Benoit de Gryse, MSF operations manager for Myanmar and Malaysia.

"If the Rohingya are to have any chance of a better future, the international community must redouble its diplomatic efforts with Myanmar and champion greater legal recognition for an incredibly disempowered group"
- BENOIT DE GRYSE
MSF OPERATIONS MANAGER FOR MYANMAR AND MALAYSIA

Bangladesh: A fire broke out in Cox’s Bazar Refugee Camp

Rohingya refugee crisis: Three questions on life for the Rohingya in Bangladesh

Bangladesh: Five challenges for the Rohingya in Bangladesh amid COVID-19

“They suffer in silence”: Meeting mental healthcare needs of refugees in Bangladesh

Rohingya refugee crisis: Two years on, no solutions in sight for the...