Monsoon rains have plagued Pakistan for months and have become yet more intense in recent weeks, causing widespread damage in much of the country, increased by global warming and the melting of glaciers. Millions of people have lost their homes and are being forced to sleep in makeshift shelters, while many health structures are damaged or not functioning. MSF teams are stepping up their support to people affected by the situation and are preparing to intervene quickly in case of outbreaks. Dr Khalid Elsheikh Ahmedana, Deputy operations manager of the Emergency desk, shares the latest update.

What are MSF teams currently doing in response to the floods?

MSF has been present for a long-time in Pakistan, specifically in the provinces of Balochistan, Sind, Punjab and Khyber Pakhtunkhwa. Our teams intervened quickly after the declaration of a state of emergency on 25 August, initially with whatever resources were already at hand: around a thousand people work for MSF in the country but in a natural disaster of this magnitude, that is not much. Initial estimates from international organizations indicate that several million people need humanitarian aid. These figures are obviously to be taken with caution, because it is difficult to have an accurate picture of what is happening across the country. But our teams in the field saw that the needs are immense. They saw villages completely underwater, of which sometimes you can only spot the top of a house. Many people have lost everything and are sleeping in makeshift shelters or tents by the roadside. The situation is not the same in all regions, or even in all our areas of intervention: some towns or villages have been more affected than others. Our colleagues travel to different regions to conduct assessments and start providing care to residents. Our mobile clinics try to bring primary healthcare as close as possible to the people who need it. In addition, logistics teams do their best to provide drinkable water. They also distribute essential goods, such as soap, hygiene products and cooking tools. We hope to be able to quickly send more material and human resources to ramp up our intervention, especially since the situation could worsen if new floods and floods occur, which could happen. 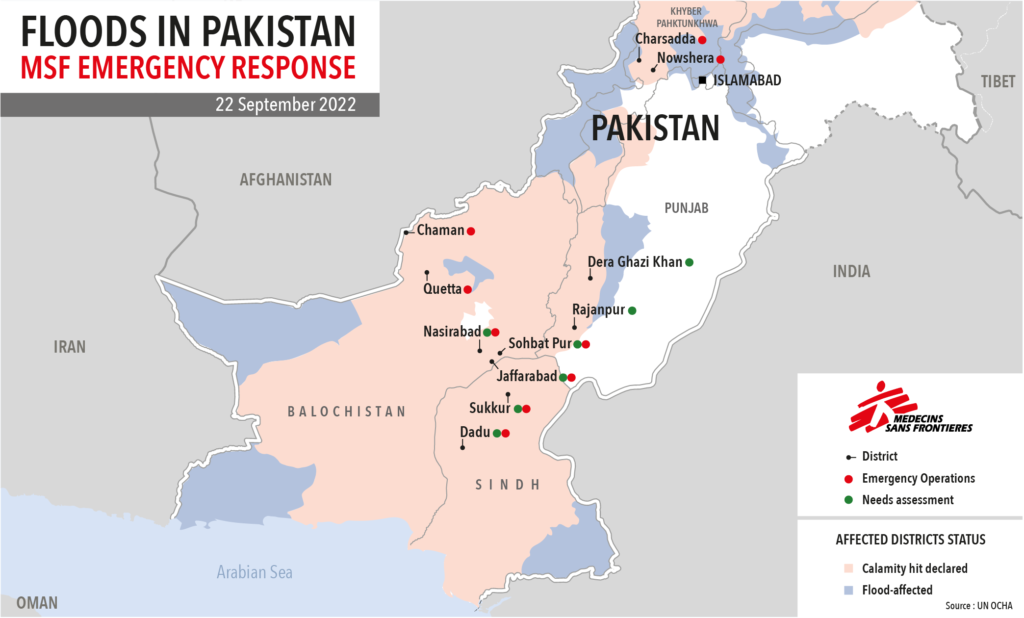 What are the main needs of the populations from a medical point of view?

It is too early to draw clear conclusions. Nevertheless, we know that some diseases endemic to Pakistan could spread due to the deterioration of the living conditions and lack of hygiene. Malaria, which is not a waterborne disease strictly speaking, could develop due to stagnant water. Those most at risk are children, who are known to be the main victims of malaria. Dengue fever, also transmitted by mosquito bites, is another endemic disease in Pakistan. There are also cases of severe watery diarrhea, which are a consequence of the floods, because groundwater and more generally water reserves may have been contaminated. Pathogens proliferate in such conditions and if people lack access to safe drinking water and functional latrines, water-borne diseases are likely to spread. MSF teams work to prevent the development of such diseases, by setting up dedicated treatment centers or distributing antimalarials. Special attention must also be paid to people with non-communicable diseases, such as diabetes, because in the absence of functional health structures, they could suffer from a loss of continuity of care. Much depends on more accurate assessments, which our teams are carrying out. For the time being, since the people we meet are mostly displaced people who live in makeshift shelters, one of our priorities is to be able to provide access to drinking water and suitable shelters and to restore better hygienic conditions. These are the most urgent needs.

What can be the long-term consequences of these floods?

The consequences of a natural disaster depend on its magnitude and the number of people affected. Monsoon rains have tripled this year in Pakistan, according to some estimates, and almost a third of this country of 220 million people have been submerged. It is an event of considerable magnitude. We must also take into account the destruction of part of the health system, because many structures are damaged and will take time to rebuild. At this stage we cannot predict anything, but we try to be ready to intervene quickly under different scenarios. These floods are likely to affect the population for months. Part of the agricultural fields, crops and food stocks were destroyed by the floods. For some people in the country, access to food could be a problem for weeks or months to come. Some groups of people are more vulnerable than others, such as pregnant women or children. We have already begun to send therapeutic and nutrient-rich food, which we also use in other areas of intervention. We may or may not need to use it in this context, but it is better to anticipate potential needs, in a situation of this magnitude.