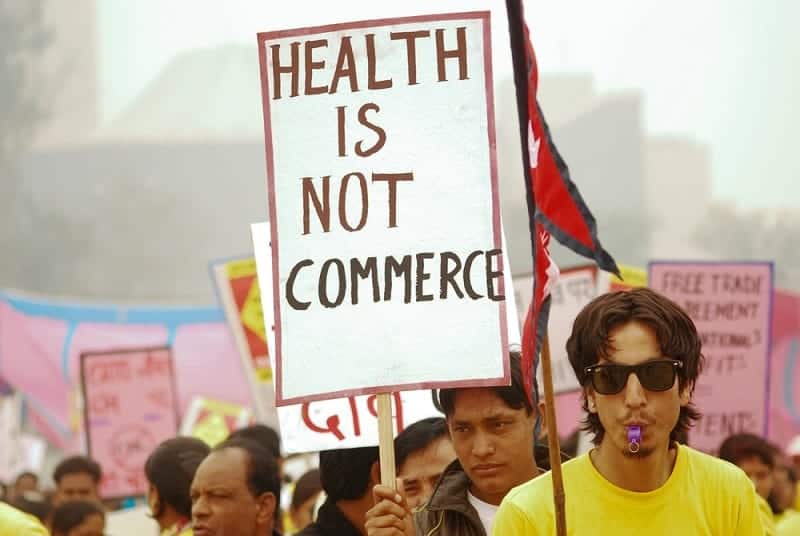 Berlin/New Delhi, 13-April-15: On the occasion of the visit of Indian Prime Minister Narendra Modi to Germany, Médecins Sans Frontières (MSF) calls on German Chancellor Angela Merkel to refrain from pushing for harmful IP provisions in the EU-India free trade agreement which is currently under negotiation. The EU-India Free Trade Agreement (FTA) has been in negotiations since 2007. From the outset, the European Commission has pushed to include provisions that would undermine India’s ability to produce affordable medicines on which millions of people in developing countries rely.

A high level exchange is taking place between the Indian Prime Minister Narendra Modi and the German Chancellor Angela Merkel at the Hannover Trade Fair in Germany this week, where the Indian government is heavily promoting its ‘Make in India’ campaign in pharmaceuticals.

On the agenda is the reinstatement of negotiations for the controversial EU India free trade agreement.  https://goo.gl/hnmG84

Philipp Frisch, Coordinator of the Access Campaign Germany states: “India’s leadership in producing affordable medicines is due to its patent law which applies internationally recognised legal safeguards for public health which allows generic competition to flourish, bringing down the prices of medicines for HIV, TB, and hepatitis C by over 90%.

For years, the EU – blindly lobbying for their pharmaceutical industry – has pressured India to introduce harmful policies in a bid to stamp out competition from Indian generics. We urge Chancellor Angela Merkel to resist putting pressure for aggressive IP policies that will severely restrict people’s access to these life-saving medicines in her talks with Prime Minister Modi.

In light of the German G7 presidency and the G7’s focus on global health, it would be a fatal signal to restrict Indian generics production by demanding IP provisions going well beyond current trade rules. These provisions would impact on access to life-saving drugs from India, having a dramatic effect on MSF’s work and putting millions of lives in the balance. “

“The ‘Make in India’ campaign is a push by the Indian government to encourage India as a manufacturing hub. However, increased levels of intellectual property in areas such as pharmaceuticals could potentially come at the expense of undermining public health provisions and local production which have made India the ‘pharmacy to the developing world’ supplying affordable generic versions of life-saving medicines”, says Leena Menghaney, Head-South Asia, MSF Access Campaign.

The EU-India Free Trade Agreement (FTA) has been in negotiations since 2007. From the outset, the European Commission has pushed to include intellectual property provisions that go well beyond the WTO’s trade rules and are aimed at undermining India’s ability to produce affordable medicines on which millions of people in developing countries rely. For more information on the trade agreement, and the dangerous provisions in the deal, read: https://www.msfaccess.org/content/europe-hands-our-medicine-campaign-briefing-document

Certain provisions damaging to access to medicines such as patent term extensions and data exclusivity have been removed by EU negotiators or rejected by the Indian Department of Industrial Policy and Promotion (DIPP) from the proposed deal. See:  https://goo.gl/CFxr1V

However intellectual property (IP) enforcement and investment provisions, proposed by the European Commission in the draft negotiating text, were still under consideration by the negotiating teams before they were halted due to elections in the EU and India.

Enforcement provisions could potentially block the production and export of generic medicines from India – a lifeline for millions of people across the developing world. In addition these provisions would also open the door to abusive practices in India from multinational corporations, by allowing the supply of medicines to be stopped, delayed, seized, detained and destroyed.

Measures on investment could see the Indian government sued by multinational companies for billions of dollars in private arbitration panels if national laws, policies, court decisions or other actions are perceived to interfere with their investments; for example, if an Indian patent office rejects or overrides a patent on a medicine resulting in the increase in availability of affordable generic versions. For more information read: https://www.msfaccess.org/content/letter-msf-indian-prime-minister-regarding-access-medicines-and-eu-india-fta